Hundreds of workers employed by Gannett-owned newsrooms took part in a coordinated walkout during their lunch break last week in response to a string of emails from upper management that threatened layoffs due to the company’s second quarter financials. The workers believe that the financial austerity at Gannett is a result of financial mismanagement and frivolous spending by executives and cannot be solved by further staffing cuts. The NewsGuild-CWA represents more than 50 Gannett-owned newsrooms across the country. Over half of those newsrooms participated in the action and gathered on Zoom to discuss next steps to fight back against the company.

“Gannett continues to show that it puts investors and executives before journalists. In contrast, local journalists are organizing all across the country because of their deep commitment to their work, their communities, and their newsrooms. Well-staffed and fully functional newsrooms are a critical component of democracy, especially in an election year,” said NewsGuild-CWA President Jon Schleuss. Read more here. 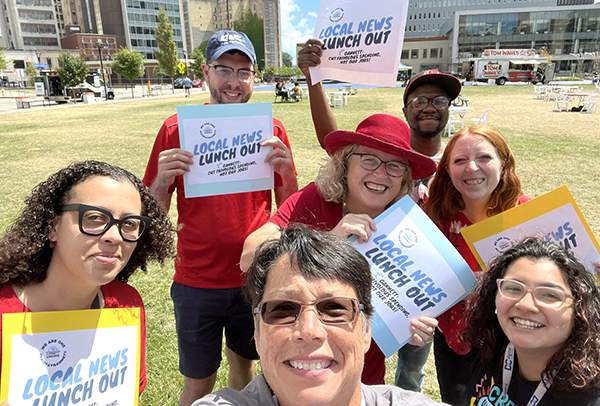 Hundreds of Gannett journalists represented by the NewsGuild-CWA walked out in protest of potential staffing cuts.

Pelosi's Legacy of Leadership, Putting Workers First, for the Next Generation to Follow